Get out of here cat 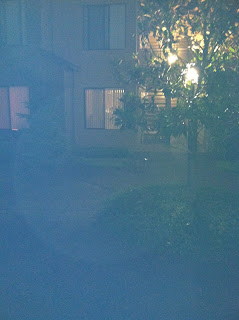 As Aaron and I were walking to the apartment one night I saw some animal in the bushes so I said "Get out of here cat!" To which Aaron says, "that's not a cat, that's a raccoon." What the ....! A raccoon? I tried to take a picture but  it didn't turn out very well. If you look carefully you can see it's glowing eyes. I risked my life taking this picture so I hope you enjoy it. The raccoon started coming after me once I took it so I quickly ran up the stairs.


P.S. The raccoon must live in our complex because I've seen it a few other times at night, safely on my balcony.
Posted by Elena at 3:40 PM No comments:

Email ThisBlogThis!Share to TwitterShare to FacebookShare to Pinterest
Labels: raccoon

What do I do when I don't have anything else to do?

Bake! And cook. but mostly bake. I love it and since it's been raining a lot lately it's nice to warm up the place with the oven and delicious smells. This is a picture of the cream fruit tart I made. 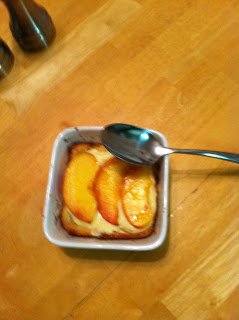 I don't have a tart pan so I put most of it into an 8 inch pie tin (from Marie Callender's) and put the left overs in this. The peaches up here are amazing! They are so sweet and juicy. They complemented the cream perfectly. This little baby filled up me and Aaron though we added more peaches, so I didn't want to tackle the big one by ourselves. A family in the ward invited us for dinner so we took it over. Pretty everyone loved it but the dad who doesn't like fruit so his son ate his share of the peaches.
I've also made coffee cake muffins, two batches of cookies and most recently lemon blueberry scones! Aaron sometimes has a hard time eating breakfast so I try to find things that he enjoys. He said that he liked having the muffins, which we usually eat with peanut butter so it has some protein. So if any of you have some delicious, healthy muffin recipes let me know. Scone recipes are also welcome :)
Posted by Elena at 3:32 PM No comments:

Pike's Place and the IMAX

Though both of the Castillo parentals had been to Seattle before my mom wanted to go to Pike's Place again. This time we did it right, a overcast Tuesday and hungry.

We wandered around pretty much the whole thing but around the end, in the words of my niece Attalie, our tummies were begging for a treat. I remember seeing a fresh donut stand the last time I was there so we went searching for that since my papa loves donuts. We found it and purchased scrumptious fresh mini donuts. I mean fresh from the fryer, burn your mouth deliciousness.

The night before my parents left we went to go see an IMAX because Aaron can get tickets to the Pacific Science Center (including the IMAX) for $3.50 with his Microsoft prime card . As we were standing in line some people offered us three free tickets so we ended up only paying 3.50 for all of us to see Transformers 3 in 3-D. It had been a long time since any of us had been to the IMAX so it was especially fun. And the fact that most of the tickets were free added to the awesomeness. Because it was at the science center there were a lot of cool stuff around.

Other adventures with Padres Castillo

My mother loves books. I mean really loves books, as in stay up till 2am to finish one. This habit may stem from years as an ER nurse but I think it's probably got more to do with wanting to finish the story. Mamacita isn't the only one that taught our family an appreciation for literature, my dad also really enjoys books but usually a very different genre but loves books all the same. Downtown Seattle fortunately has used books stores tucked into all sorts of little nooks and crannies. This picture was taken at one of them. On Saturday Aaron, my parents and I all went on  a little day trip up to Canada since it is only 2 ish hours from where we live. We went to the Vancouver Temple which was a small adventure in itself. The GPS didn't recognize the address of the temple so I had been using my phone to navigate. Well that was fine until we crossed the boarder into Canada which meant that our phones were roaming so we had to turn them off (just airplane mode for smart phones). Fortunately my phone had most of the map loaded so we were able to find it just fine. As we were pulling into the temple parking lot we saw ... a goat! It stared us down for a while but when I tried to get a picture it ran off.  A goat! Crazy. Anyway the Temple was beautiful, and my first temple outside of the Mesa. After that Aaron and I asked my dad what he wanted to do. He didn't have any concrete plans beyond the temple and a wanting to see downtown Vancouver. So we drove around for bit. We couldn't use our phones to find things to do so we ended up following road signs that said tourist attraction. We ended up at a lovely place called Lynn Canyon. 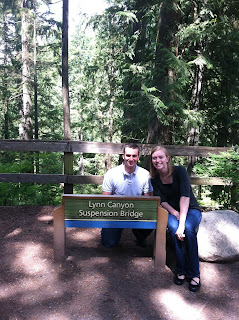 There was a 48 meter suspension bridge that we crossed. It was kinda scary to me but still cool. Papa C said that there was a really, REALLY long one somewhere close by but 48 meters was enough for me.
The scenery was amazing. We hiked around a bit even though I was not wearing good shoes but the trails were well kept so it didn't matter very much.
We stopped at a grocery store to get water and some snacks and asked the cashier what were some cool things to see/do in Vancouver. She recommended Stanley Park. So we went to Stanley Park. Big Mistake. That particular weekend happened to be the anniversary of the establishment of Vancouver. That means a LOT of people trying to get into Stanley Park. We waited in the traffic for about hour, maybe longer, before we gave up and went home. Overall it was a really nice day.

Adventure 1 with the Castillo Parents

So my parents came up to visit  for 6 days which was super nice. It gave me a chance to do some of the tourist stuff with someone since Aaron started working. First we went on something called the Underground Tour. It was a really interesting history of Seattle with actual excursions in to the underground tunnels in downtown Seattle. Here are some pictures:

So I could tell you all about the tour but really you should just come and go yourself. For reals though the first toilets were called after the man who perfected them, Thomas Crapper. Crapper. Heehee :) 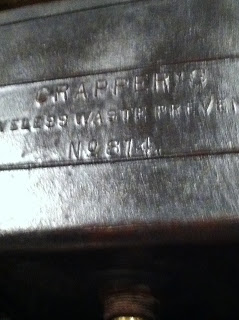 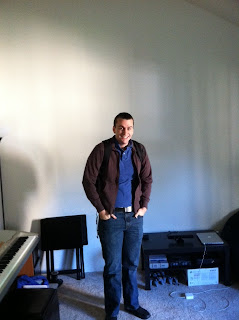 This is a picture of Aaron on the morning of his first day at Microsoft, which apparently is approximately 8 hours of power point presentations. That is the only detail he told me. 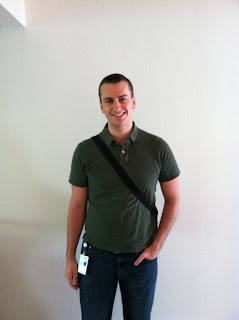 This is a picture on his first day of actual work at Microsoft, which he is currently still at so he'll probably post on it later.


P.S. My mother always took pictures of us on our first day of school every year and/or the first day of anything. The tradition has stuck. And isn't my husband so handsome?
Posted by Elena at 12:00 PM 1 comment:

(This is Elena) So just in case you didn't know, I collect Nerf guns. This collection started on an Easter many years when my brother Todd was still living at home. My mother ... I mean the Easter Bunny had given Todd two foam dart guns, and being the big brother that he is, he immediately started shooting it at me. Well my brother and I have a history of wrestling and such so I grabbed the other gun and shot back. This started an extended war. Whenever I knew Todd was home I would get one of the little foam guns and sneak up, shoot him then run away. Always use Guerrilla tactics on a bigger, stronger enemy. Todd of course did the same to me minus the running away. It was a fun way to spend time with my brother (who sometimes is not so good at verbally communicating affection) and his way of telling me that he cared. We would hide in doorways, jump into different rooms, shoot blindly around corners and kamikaze run at each other in our skirmishes. I think that was the best Easter present either of us had ever received. My sweet brother bought me my first Maverick for Christmas shortly after. It was awesome. Little did either of us suspect that it would lead to an Nerf Arsenal of over 8 different types of foam weapons. I have all of these : D
Night Finder (2)
Maverick (2)
Raider Rapid Fire
Longshot
And two off brand guns courtesy of Boushley Family Christmas 2010 (watch out for Grandma Boushley she's a mean shot) 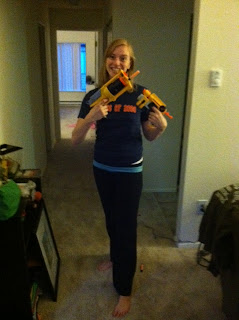 Well Aaron and I had to break in the new apartment with a Nerf War and were pleased to discover that this apartment is perfect for foam dart battle. We have three rooms in the back not to mention the couch in the living room and the kitchen which all provide great cover and still give room to run around.  Aaron got off a sweet shot here : 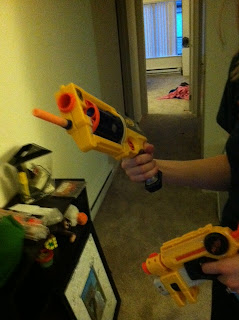 This is a great alternative to watching TV or playing first person shooter games : )
Posted by Elena at 11:52 AM 1 comment:

Here is Alot of Spaghetti 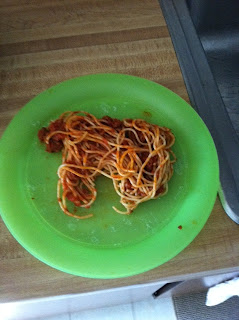 This is in reference to a hilarious blog http://hyperboleandahalf.blogspot.com/2010/04/alot-is-better-than-you-at-everything.html
Posted by Elena at 11:22 AM 2 comments:

Email ThisBlogThis!Share to TwitterShare to FacebookShare to Pinterest
Labels: Alot, hyperbole and a half

Moved - for reals this time

Aaron and I finally moved into the place we will be living for the next year. It's a pretty nice two bedroom apartment with vaulted ceilings in the living room. It has a deck with a little overhang (perfect for hanging Aaron's bike, which is probably why there were hooks already out there). The movers were efficient and so were we which means they came at about 9am and we were done unpacking around 2:30. I'm still reorganizing stuff and finding homes for some of the random items but besides that we're done. This is one of the times I'm glad our parents taught us how to work until it's done. Sometimes I wondered if I'd ever be able to work as long and as hard as my mother and my mother-in-law (they helped us move into our last place and stayed till it was done). The answer is ... maybe. Both Aaron and I worked hard and long but probably not as hard or as long as our mothers. So thanks to you mothers, for teaching us how to work hard and being great examples. We love you! Here are some pictures I took while we were unpacking, I'll take some better ones of the apt when everything is done. 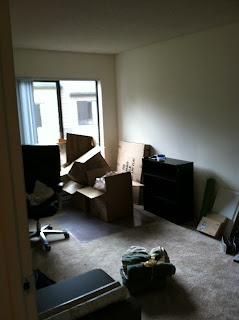 This will be the guest bedroom 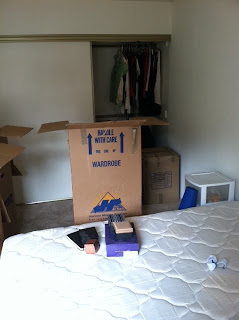 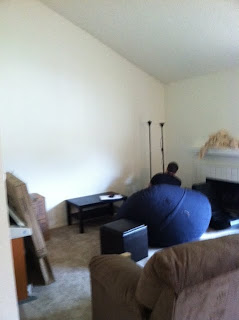 Well that is all for now. Until the next adventure!